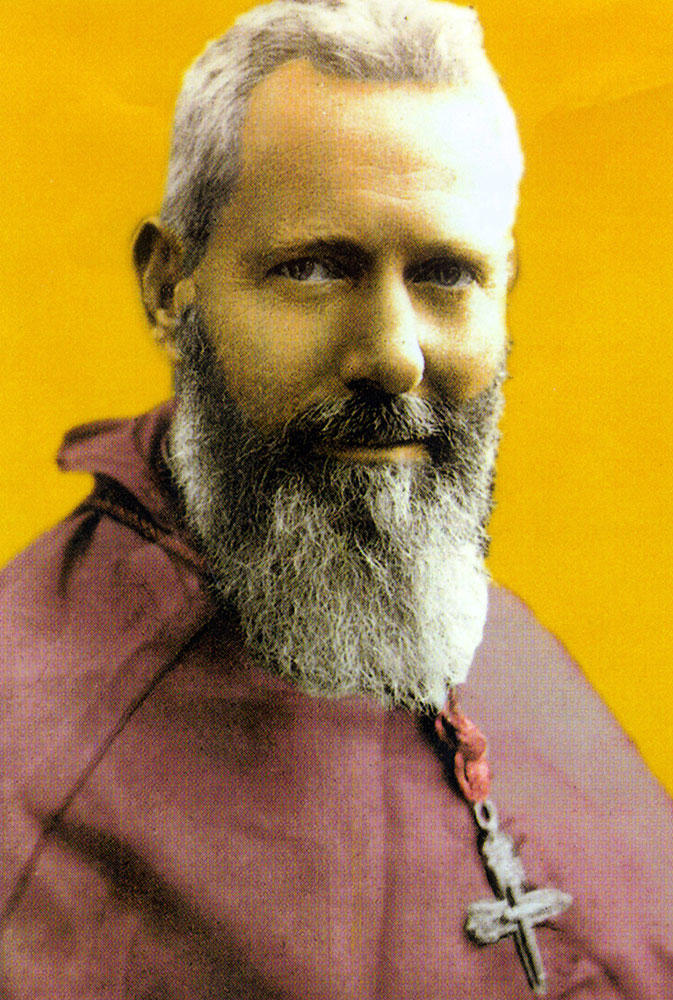 The Apostle of Nigeria

Joseph made his profession on Easter Sunday 1898, and his ordination took place on April 22, 1900 in the Blackrock College chapel. By mid-July 1902, Fr Shanahan had received his appointment for Nigeria to help Fr Léon Lejeune make bricks to build the first proper mission house in Onitsha.

father Joseph shanahan who later become the first Catholic Bishop of eastern Nigeria he joined the society of Holy Ghost father at the early age of twelve, and after his ordination in 1900. he volunteered for ministry in southern Nigeria. in November 1902, father Shanahan arrived at onitsha were he joined father lejuene–one of the most remarkable catholic missionary in Eastern Nigeria. following the retirement and the death of father Lejuene in 1905, father Shanahan was appointed prefect apostolic in the lower Niger mission. then he began the amazing missionary carrier of the great founder of the Christianity in southern Nigeria. he become the vicar Apostolic of the newly created Vicariate extending from Tivland in the North to Calabar in the south and from his Onitsha headquarters on the Niger to Ogoja in the east.

Joseph in thanks in October 1903

Thanks be to you, my God, for having preserved me up to this in your holy Apostolic Congregation. Thanks for having been so good as to send me to Africa. May your holy name be blessed and praised for all eternity. May my heart never wander from you. May I never neglect spending every atom of my energy, mental and physical, in saving those souls you love so much…

in 1917, when he was appointed by Rome Administrator of the mission in the British-occupied territory of the Cameroons. the area under his charge doubled. when he became the head of the lower Niger mission in 1905, there were twelve missionaries caring for less than 2,000 catholic adherents. by about 1920, the number of both clergy and adherents had increased so much that Rome thought it fit to turn the vicariate into a diocese, and on 6th June 1920, his 49th birthday, the vicar Apostolic was consecrated Bishop of southern Nigeria at maynooth, Ireland.

as a catholic noble missionary Bishop Joseph Shanahan is significant in the history of missionary activities in southern Nigeria in general and Iboland in particular. his astounding success as a noble missionary owed much to his unique and revolutionary missionary methods. first, he understand and great potentialities as a Christian. said he ” the African, once you understand and love him in Christ, is a treasury of goodness and loveliness. only those who have lived with him, and spoken to him of God from the depths of their own souls, know that. “speaking of the Ibos again, he said,” you can search the whole world and find no people charming than the Ibos. he understood and admire the quality of the Ibo people. to him, the letters (IBO) were significant.

secondly Bishop Shanahan that the village school rather than the orthodox Christianity village system was the surest instrument for the evangelization of the American society. so, he made it a policy to plant school in almost every village were he and his little band of ardent apostles had spread the Christianity faith. these schools became the vehicles through which the communities in which they were situated were evangelized. to ensure the success of his village schools, he opened up a teacher training college at Ibariam in 1913. it closed in 1918 as a result of world war 1 but re-opened in 1923 at Onitsha as St. Charles’s training college named after the newly consecrated Bishop Charles__ Henrey-Shanahan‘s coadjutor.

thirdly, Shanahan attitude towards indigenous religion and institution was equally unique. deeply impressed by the religious  instincts of the Ibos, he saw that what the Ibo religious wanted was not ‘destruction but transformation’. hence he name them understanding mass in terms of spirit worship and the supreme Being in term of  ‘Chukwu’. he shrewdly discover what was common between the Christian accepts and Ibo indigenous ideas, for instance, the mass and ‘Aja’ and he use these native ideas to convey Christian ideas home to his hearers. the result was tremendously effective. this synthesis of Christian ideas with what is good in native culture is what is Christian church in Africa now requires if it must survive and not peter out, God forbid, as it did pre the 19th century.

fourthly, Shanahan believed in mixing with and understanding to people property’s. so, he traveled extensively and lived with the people.” this brave Ikrish priest…. went from village to village on foot, ate the people’s food, share the same shelter with them and spoke to them in a language they could understand.” is it any wonder that the people loved him and respect him? these were the secret of his success as a missionary. their first  contribution in this sphere was the linguistic study and reduction of to write many languages of West Africa and the translation of the Bible into these languages. in sierra leone, a missionary lady Hannah Kilham produced in 1827 the first writing words of west African languages spoken by freed slaves the German missionary Koelle follow this up with his “polyglotta Africana_____a much larger study of over 300 African language. note that in Nigeria crowther was the person that reduce the yoruba language to Nupe, Hasua, Kanuri, Ibo and Ifik were also developed in the same way by the missionaries. in the Gold Coast (Ghana) the missionaries translate the Bible into Ga, Twi, Ewe, and Fante. by 1880, most of the above mentioned languages had grammar Books and dictionaries. in this way, the missionaries were able to teach convert how to read the Bible in the vernacular and so produced the first wide-spread literate class in the west Africa.

to further promote the sturdy of the west Africa language, some of the missionaries established printing presses and published newspapers. the Rev. Townsendbrought the first printing press to Nigeria in 1852, and started the first yoruba newspaper in Nigeria in ‘Iwe Irohin’ in 1895. closely connected with the literate development of indigenous west Africa languages is their second contribution, namely, the promotion of education through the opening of the primary and secondary as well as training college for the training teachers and trade school for the training of craftsmen. By 1845, the C.M.S. alone had no less than 21 primary and two secondary schools__ one for Boys and the other for Girls in sierra leone. the role of Fourah Bay college (founded by them in 1827) in the educational development of west Africa is already well known. in the 1940s, it was the only institution offering university education in west Africa. in Nigeria the work of the Christian mission in education is no less spectacular. the first grammar school in Nigeria was opened by the C.M.S. in 1859 in Lagos. the follow this up with the opening of the firs secondary school for Girls in 1868 also in Lagos. the Methodist Boy’s high school was opened in 1876 while St. Gregory’s college was opened by the Catholic in 1881. Hope Waddell institution was opened at calabar in 1895 by the church of Scotland mission. along with these, the missions also established hundred of primary schools for Boys and Girls all over Nigeria. in fact, as late as 1942, the missions controlled 99% of Nigeria Schools and over 97% of Nigeria students were attending these missions schools.

in frency-speaking west Africa, the first educational institutions were established by missionaries usually Roman Catholic. they opened the first school at St. Louis in 1817. it was not till the second half of the 9th century that the government took over controlled and began opening of states school in frency territories.

of great significant in the development of education in west Africa was the teaching of English and French language in these school by the missionaries. these two world languages were opened to west Africa the way to all the leaning of the modern world. in this way, the coming of Christianity brought west Africa into contact into modern civilization and all his influences. the most important result of missionary education Endeavour was the emergence of the west Africa elite____a new class of Africa educated not only in European literary skills and techniques but also in European ways of thought. this class serve the missions usefully as teachers, catechists and priests, and the government and mercantile firm as clerks, administrators, Doctors, and Lawyers. it is this elite class that was to play a most significant role in the social and political development of West Africa.

For the first two years he was rarely asked to take part in any pastoral work. After 1934, under the new Provincial, Dr. Dan Murphy, Bishop Shanahan made a remarkable contribution to mission promotion activities in Ireland and was remembered for his splendid addresses to the senior scholastics and his inspiring letters to the Holy Rosary Sisters.

He was invited back to Nigeria in December 1935 to perform the official blessing of the new cathedral at Onitsha. In 1938 he moved to Kenya and served mainly as chaplain to the Carmelite Sisters near Nairobi. He spent a few months in South Africa at the invitation of the Holy Rosary Sisters and died at Nairobi on Christmas Day 1943 aged 72 years, and was buried in the community cemetery in St Mary’s School  in Nairobi, Kenya. However,  in January 1956 his remains were brought back to Nigeria for the “second burial” in Onitsha Cathedral.

This achievement was based on his realization that success would depend on the early formation of a native clergy.  To that end, in 1922 he set about starting a senior seminary. In 1924 he founded a missionary society for women, the Missionary Sisters of the Holy Rosary in Killeshandra, Co Cavan, Ireland.

As his sight began failing in 1925, Bishop Shanahan offered to resign but was instead given a coadjutor, Fr Charles Heerey, who took over as director in 1932. Leaving his beloved Nigeria was a great sacrifice, and he retired to the old mansion, Clareville, attached to Blackrock College.