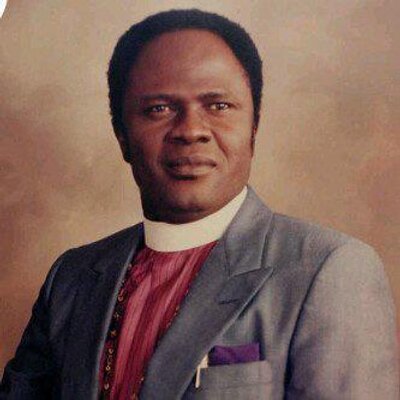 Benson Andrew Idahosa (September 11, 1938 – March 12, 1998) affectionately called PAPA or BA by his followers, was a Charismatic Pentecostal preacher, and founder of the Church of God Mission International with headquarters in Benin City, Nigeria  As the first Pentecostal Archbishop in Nigeria, he was renowned for his robust faith. He was a unique evangelist in all of Africa who reached millions of people in crusades, in his weekly nationwide telecast, in his Bible School, training eager students from several nations. He also conducted campaigns in Sweden, Singapore, Malaysia, Korea, Australia and the United States, where he often appeared on national religious telecasts. His burden for souls, his ministry of healing and miracles, even to the raising of several dead, demonstrates he was especially called of the Lord.

Benson Idahosa was born in Benin City on September 11, 1938 to non-Christian parents in a predominantly non-Christian community; he was rejected by his father, John, for being frail and sickly. He constantly had fainting spells as a child, and on one of his spells at age 18months, his mother, Sarah, abandoned him at a rubbish heap presuming him dead. Hours later, he came to, and began wailing and was rescued by his mother. He grew up in a poor household. Like most of the surrounding houses, his family home was a mud house. This reality denied him access to education until he was fourteen years old, when he was able to attend a local government school. He later took correspondence courses from Britain and the United States while working in Bata Shoe Company. Idahosa earned a diploma in divinity from Christ for the Nations Institute in Dallas, Texas, which he attended in 1971, a Doctorate of Divinity in 1981 from the Word of Faith College, New Orleans and a Doctor of Laws degree from Oral Roberts University in March 1984. He also received other degrees from the International University in Brussels, Belgium. Archbishop Benson Idahosa and his wife Margaret Idahosa were blessed with four children.

His conversion was dramatic and his calling supernatural. He was converted by Pastor Okpo on a football field one Sunday afternoon while playing soccer with his teammates. As a young convert he became very zealous in winning souls and in conducting outreaches in villages around Benin City. He was called to the ministry in a night vision from the Lord. I have called you that you might take the gospel around the world in my name, preach the gospel, and I will confirm my word with signs following,” said the voice from heaven. The room was filled with the presence of God as Benson fell to his knees beside the bed: “Lord, wherever you want me to go, I will go.” After his call, Benson launched into ministry work preaching from village to village the gospel of Jesus Christ with great power and anointing. More people confessed Christ as their Saviour, and more healings occurred as he prayed for the sick.

Benson Idahosa, the archbishop and founder of Church of God Mission International Incorporated with its headquarters in Benin City, Nigeria established over 6,000 churches throughout Nigeria and Ghana before 1971. Many of the ministers he supervised pastored churches of 1,000 to 4,000 people. In addition to filling the position of archbishop of Church of God Mission, he was also president of All Nations for Christ Bible Institute, president of Idahosa World Outreach and president of Faith Medical Centre. He held positions in numerous organizations including the college of bishops of the international communion of Christian churches and the Oral Roberts University in Oklahoma.

Soul winning was Idahosa’s primary concern. With a motto “Evangelism our Supreme Task,” he worked towards this goal of reaching the unreached in Nigeria, Africa and the rest of the world with the Gospel of the Lord Jesus Christ. As a black African, he found the doors of African countries were wide open and he ministered in over 123 countries all over the world. Crusades played a major role in his ministry. He was involved in at least one crusade per month. A record crowd of nearly one million people a night attended his Lagos Crusade in April 1985. He established the Redemption Television Ministry with a potential viewing audience of 50 million people.  He spent quality time in prayer and in the study of the God’s Word. He said that if someone spends time studying the Bible and acting on it, people will come looking for that person for life solutions. Idahosa also spent time studying the works and lives of other successful people both in the gospel ministry and other fields of human endeavors and he applied the principles he learned about these successful people to his life and ministry. He was very energetic and hardworking. Archbishop Benson Idahosa was said to be the leader of over seven million Jesus people worldwide before he went to be with the Lord in February 1998.